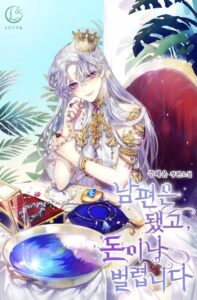 I became the wife of a man who had a lover.
So I should do my best to help him stay faithful to her, right?
*** Aristine is a royal princess imprisoned for life, because she is hated by the emperor.
The emperor forced her to death in an arranged political marriage with the prince of their enemy country.
They rumored that he was a bloodthirsty savage, but… Her fiancé, using the word “savage” was still not enough to describe who he was, so much more than the others. rumor.
“However, he was arrested, so he is of no value to me. I will just focus on making lots of money from now on!”
Will Aristine be able to fulfill her dream of living a luxurious, rich life? Or will she be able to kill two birds with one stone and win her husband?

In the Name of Love

I Picked Up the Second Male Lead After the Ending

One Step Forward to the Flower Path

Don’t Fall In Love With The Villainess

Dear Fairy, Please Contract With Me

My Husband Ascended as the Chosen One

The Secret Bedroom of a Dejected Royal Daughter

I Adopted the Male Lead