Can I have a date with the Crown Prince again?

Read manhwa Can I have a date with the Crown Prince again? – teenmanhua 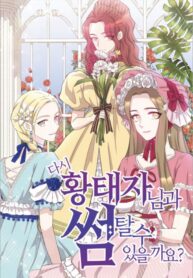 This is the story of a princess and a prince, who made a promise to wait for the day to meet. Time is a valuable asset that money can’t buy anywhere.
She is the princess of Kairos Palace, who is reincarnated after a century and possesses magic that rules time.
Philip, he is the prince of the Infinitas Empire, from a young age was raised with strict upbringing from the royal family. From a very young age, he was the first to learn the poker face, and because of that, he never broke a smile.
However, one day, the princess appeared, he felt a flutter and fell in love with her without even knowing it. The princess also has a crush on him.
But the situation in the country puts their relationship in jeopardy by war and internal intrigues. So the princess thinks how to make people live happily.
Finally, the princess is reminded that time must pass and that being together in it is meaningful. The crown prince accepts the princess’s will and decides to marry her and support her with his own strength.

I Became the Beastman’s Wife

What Should We Eat?

Empress of the Ashes

I Want To Become The Emperor, So I Need A Divorce