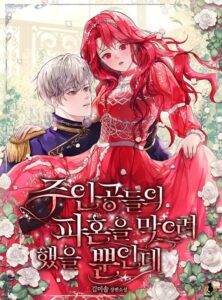 In a romance novel full of shoveling and misunderstanding, she possessed Namjoo’s younger sister. Fallen in the novel, I took off my feet for the frustrating main couple, but on the day of their engagement , the main characters declared their breakup! And at the center of it was the heroine’s older brother, ‘Aiberg Raphael’. The monster duke, aiberg was quite a ‘siscon’… … . In order to get rid of ‘Siscon’, wouldn’t it be reasonable to just do it? “What is the Duke’s ideal type?” “A woman with red hair and eyes resembling blazing fire, and who will not be discouraged by whoever stands before me. Ah, when I say this… … You look like my ideal type.” I was just trying to prevent the breakup of the main characters, but did I cheat on the female protagonist’s brother without knowing it?

Originally A Lady With One Line

Travelling Through the Universe’s Flower

Princess of the Animals

A Young Miss Past Life

1stkissmanga, A Thousand Year Engagment, Best Manhwa, Good Manhwa, Hot manhwa, I Just Want To Walk On The Flower Road, I was just trying to prevent the breakup of the main characters, kunmanga, mangazin, manhwa websites, The Planned First Kiss, The Princess Wishes To Die Peacefully, You're a Supporting Character Just Love Me

The Return of the Disaster-Class Hero

Sacrifice Myself To Get Your Love

The 10th Class Lout of the Knight Family